Delayed Post: June 2011
With the floors done and the bedroom walls painted, the last thing in our 2 week pre-move in blitz was....﻿ 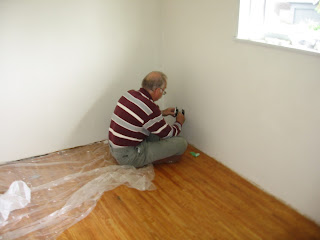 No, Papa Waffles is not having a time out.... he's busy changing out the insane variety of light switches and plugs in the house.  I didn't know that they even made that many different styles!  Well, I'm guessing we had ones that date from every era that our house has been here.... don't believe me?  This is what we were dealing with! 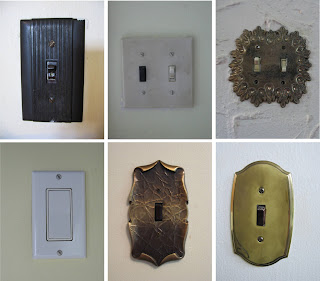 Mmmm dimensional brassy gorgeousness.
Every room in the house had a different set, it seems the previous owners were big on the matchy matchy principle, but saw each room as independent... ie. our masterbedroom which had seafoam carpet, seafoam walls, and seafoam curtains.... oh yeah and the middle bottom in the montage!
Posted by Sarah at 9:46 PM 2 comments

So, we last left off with the floors prepped for sanding.  What I didn't mention was that we were also going to be painting the bedrooms before moving into the house (oh the joy of living rent free so one can tackle the big stuff without having to live in the chaos!- love you Mom and Dad!!)


During the weekend from hell (aka staple-fest), my mom got busy painting out the closests of the three upper bedrooms- white- yeah, we are super original aren't we!  And boy did they need it.  Ckeck out the crazy avocado colour of our hall closet.... it's amazing that they could see anything in there it was so dark! 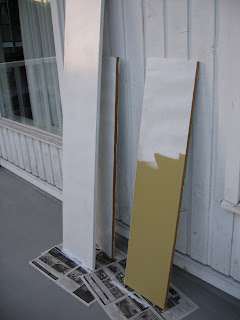 During the week and the following weekend we tackled the rest of the painting﻿.  It was long overdue, as they alll had ceilings the classic shade of smokers beige (gag!). 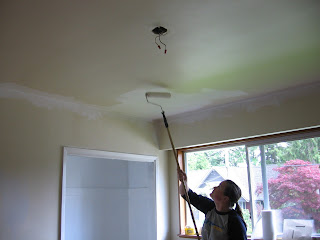 With the painting tackled, over the weekend we rented a floor sander for the floors.  Our research led us to rent an orbital sander (ours was a U-Sand) vs. the traditional drum sander, and it rocked!  The finish we were able to achieve is much more even than the other wood floors in our house which were refinished by the previous owners with a drum sander.  For any locals considering this we got ours from here, not only were they the most coveniently located to us, they were also the cheapest. 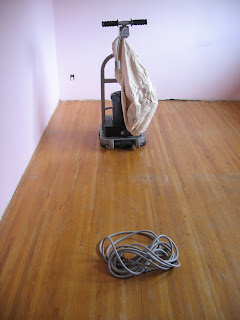 But I digress... we picked up a sander and kicked things off in the 3rd bedroom as it had the worst floors (remember the decomposed underlay the was stick to the floors, no amount of cleaners was getting that stuff off, so we resorted to sanding it off).
Having used a floor polisher in Belgium previously I was very doubtful of my abilities to "drive" the sander (my polisher experience was just like a bad cartoon with the things flying around the room with a life of it's own and my clinging to the back of it) so... I persuaded my Dad to give it a go ('cuz that's what Dad's are for right? 'cuz my Dad is a star!). 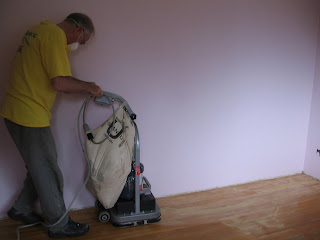 However, this thing was a dream, super easy to manuver, it was more like dancing (and yes, I named it Matilda, hence the post's title!), with a bit of ab workout mixed in!  So, in the end we all took a whirl at at and the floors scrubbed up really well, but the amount of dust was nuts, even with the vaccumm feature of the sander (heck I can still see the film of super fine dust on our living room walls walls 6 months later- but that could also be reflective of my lurve of cleaning ;) ... or how tall those walls are since we have a cathedral ceiling in that room).
Then was wiping down the floors in prep for the verathane.  We ended up going through 3 cans of verathane... partly because we had a lot of floors to do (3 bedrooms + a long hallway x 3 coats) but also becuase I learnt avery valuable lesson.... make sure you stir the can before each layer because it settles really fast- the outcome was everything was perfect until the last coat (which I had accounted exactly the right amount of verathane for), which dried ..... matt as in not shiny, which I acutally love on floors, but did not go at all with the rest of are hardwood which was high gloss- eeek!  so, down to the store I went (after a chat with verathanes customer service to identify what was the cause - me, duh! We had to spring for a 3rd can.  And, luckily it was worth it becasue we went from this... 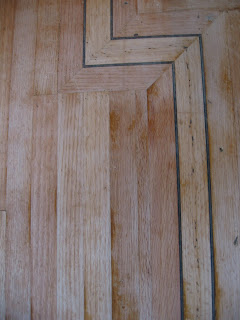 That's more than $3000 cheaper than the quotes we recieved for the sanding and refinishing!
Posted by Sarah at 4:00 PM 1 comments

Crafty Waffles gets a facelift

With the new lease of life here at the ol' blog, I thought it was a good time to spiff it up a bit visually.  As a rookie blogger, it's still a very steep learning curve, so your feedback dear reader would be much appreciated.  Please let me know how you like/don't like the new layout and design, things you'd like to see etc.


H and I knew from the get go that the carpet in the upstairs on the house had.to.go! The whole house had been steam cleaned by the previous owners, but 30+ years of heavy smokers had paid their toll, and the house was holding on to the smell. We probably could have used some special cleaners to get rid of it, but the fact that every room had a different coloured carpet- from light grey, to lime green shag, to forest green. We knew from our house inspection that there were hardwood floors under the carpet, but we had no idea on their condition.... were they covered for a reason? what the beeep are we going to do if they are a hot mess? 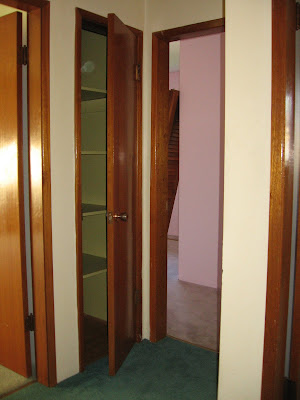 The end of our hallway with the rainbow of flooring, four different colours within a square meter of each other!
We had decided that the green shag had to go, it was old, dirty, and generally beyond it's sell by date. 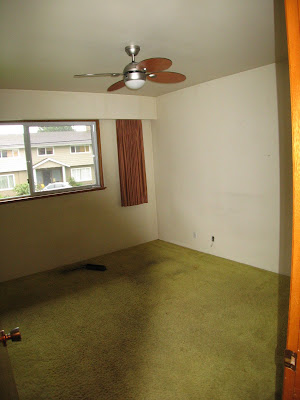 Yes, this is post steam cleaning- yuk!
We got the keys to the house on the evening of June 8th, and bright and early the next day we were in ripping the carpet up in the 3rd bedroom.... and man was it overdue, not only was the carpet decrepid, but the underlay was litteraly decomposing, crumbling and sticking to the hardwood underneath. 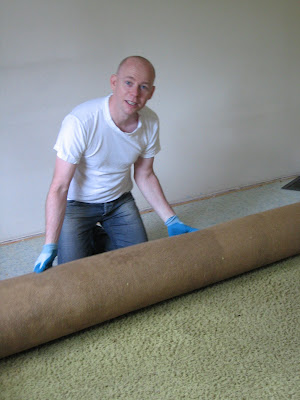 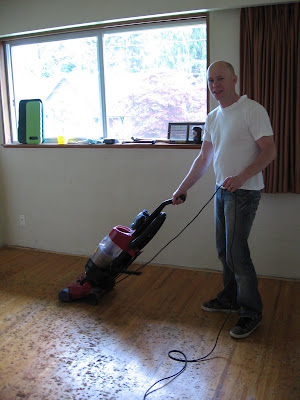 However, we could tell that the floor was in pretty good condition. So, after reviewing the situation the next morning, we agreed that it was buh buy carpet, and the other rooms soon followed.

In order to save some pennies, 'cuz we're two cheapos who don't like paying people to do things that we can do ourselves (aka. couldn't have affored to pay anyone since we were broke from having just bought the house!), we decided to tackle the floor refinishing ourselves.

While the carpet itself was pretty quick to remove, but the staples.... oh, the staples! We spent about 2 full days with my dad on our hands and knees prying and digging out kabillions of staples, it was insane! By the end of each day I had a claw for a hand and wrists, knees and bum that felt broken. I thought it was never.going.to.end! 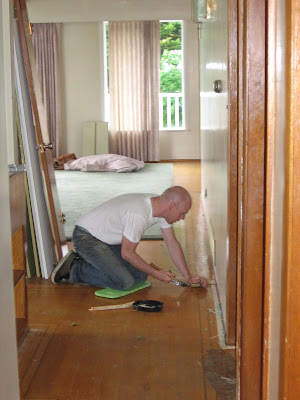 But, it did finally end (thank goodness or I might have started to cry I hurt so much by the end of that weekend) and we were left with a hallway with inlay (woop woop, a total bonus we were not expecting!), and 3 bedrooms in good enough condition that no repair work was needed (yay cuz I honestly don't know what we would hve done if they did need repair$). But, we were left with a very grimy floor that needed a facelift, but oh the potential!! 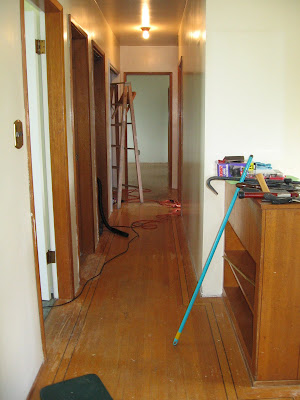 Yes, I was so tired and sore from staple-fest that I didn't have the energy for a proper "styled" or even a "victory" photo!
Posted by Sarah at 9:04 AM 0 comments

After being on a pretty hefty bloggy hiatus, I've come to appreciate the benefit of having a place to log the events in our lives, as well as an impetus to take pictures of what we are dong to record it and to have something to look back on and remember. So because of that, combined with inlaws who want to know what H and I are up to in our new life in Canada, Crafty Waffles is back! I'm working on a bunch of posts from the first 6 months in our new house (wowza, is it seriously thaaat long?!), so I'll be catching up the the present and then letting you know all the new things we are planning and doing around Casa Waffles.