The Great Cover up

In the midst of our basement reno, right around the time we were toiling away doing the insulation in the basement, we were also toiling away upstairs.  Why you might ask would we tackle that at the same time as a major reno in the lower half of our house?

And reason #2, is that our roof was leaking and was starting to look like a quilt from the outside due to all of the tarps draped over it, and a start-up mushroom farm on the inside due to the damp conditions inside. 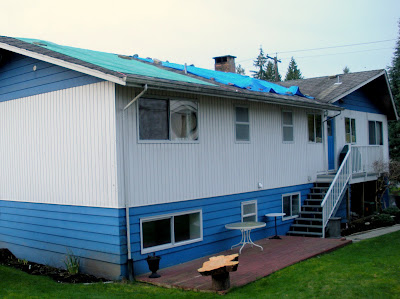 Because of #1 we were in a time crunch for the attic insulation, and because of #2 knew that before we could tackle that we had to take care of our roof.  Luckily (?) the roof issue had been raised by our home inspection, so we knew when purchasing the house that a new roof would be in order, but had been told we should be able to eek out a year or two... apparently, less than 6 months was the actual remaining lifespan.  Although el buget was already stretched, we knew that there was little point in investing in our interior, if the key area of our exterior was not doing it's job.  So, we dug deep and called in the pros. 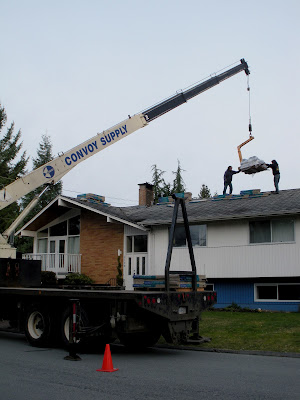 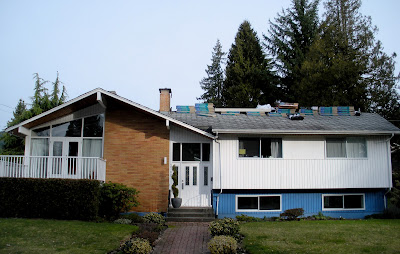 Over a two day period they had our old pale grey roof stripped and a nice charcoal grey, specifically  "Moire Black".

There were a few surprises along the way.
So,... no wonder it'd been leaking!  Our roofers (for any Vancouverites, we used these guys and were super happy with their prices and workmanship), sorted it all out and we are happy to report we are now leak (and mushroom free) up there! 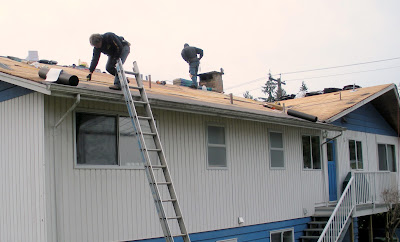 ﻿﻿
Anyways... back to the re-roofing!  Our old grey was out, and our nice dark grey roof was in.  It may not sound like a big difference, but man oh man, in person it's huuuge!
Just like a little black dress does wonders for a woman's wardrobe, our crisp dark new roof is giving our little rancher a huge exterior makeover.  Don't believe me?  Check the before and after out! 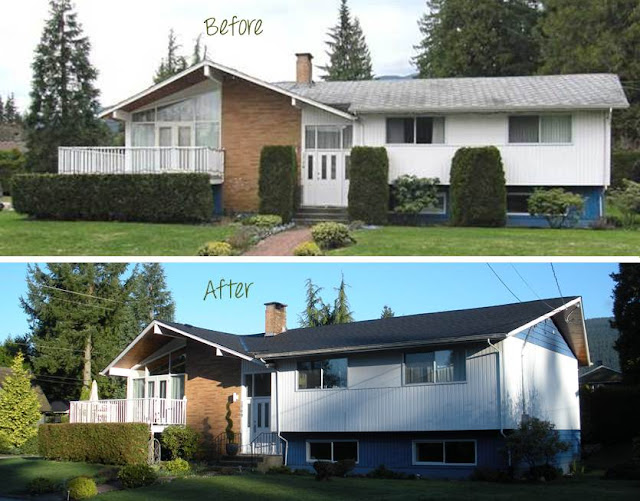 H and I are loving it (and loving our dry house!), and are now planning the next big exterior makeover, painting the house!

Oh, and something I though might be worth sharing, before you get re-roofed, pay attention to how the water flows off your roof. We had a few areas that the water missed the eves troughs due to the steep incline or angle or the roof / trough. In these areas the water was streaming off the roof and was digging holes in the garden and making a soggy mess. 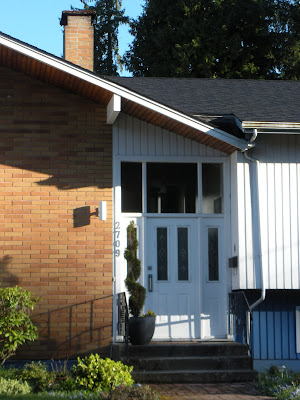 ﻿
One of our problem areas was this long rum off the cathedral section that funnels down to a small 1ft section of gutter. After a little discussion with you roofing team, they were able to install special little ... "flaps" that help guide the water and slow it down to we are now waterfall and soggy patch free, and all at no extra cost!

Note:  We were not perked in any way for this post, we just really liked working with them and wanted to pass it on 'cuz we know how hard it can be to find quality reliable trades.
Posted by Sarah at 8:27 AM