Shine a light on it

So, waaaaaay back in October, I mentioned an almost free light I picked up on Mr Craig's List.   To help jog your memory as it was a while ago, it was this one... 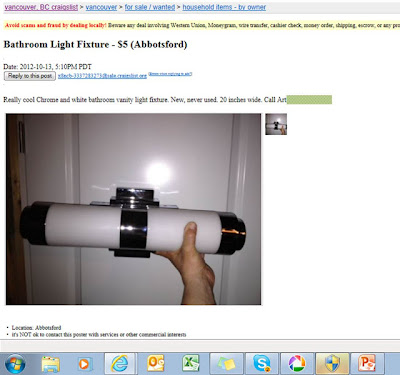 That little cheapo gem was destined for our family bathroom- a room you have never seen before... for a reason.  It's filled with pink floors (with matching grout) and glass brick (barf) half wall.  And a "stunning" mirrored runway light (double barf).  While we are saving up to do a full reno on this room  -- there are a lot of things wrong in this room: the shower hot tap leaks permanently and the only fix is to smash open a wall, my above hatred of glass brick, and a grody jacuzzi tub that we daren't use the jets on for health concerns (don't ask, you don't want to know!), and Mcgyvered plumbing by the previous owners which has resulted in a very slow draining shower no matter what we do to name a few....   It's functional for sure but a long way from awesome.

But I digress, as we are saving up for a full reno, my budget for this room was basically $0 to give it a lipstick makeover to tide us over until reno day- hence the uber cheapo light.

Just before the holidays we (my Dad- our electrician  since my sparky situation when I tried to install our bedroom ceiling light myself- oops!) got around to actually installing the darn thing (yes it's been up for almost 2 months now, bad blogger!)

Being that I got it for basically free, I was a little skeptical on I the thing would even work... so we took down our old mirrored runway light,  and wired the new one up. 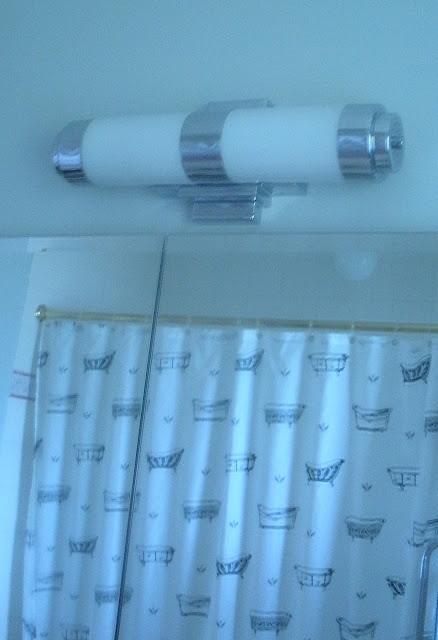 And turned her on. Ahhhhhhh, so much better than the 90's pink mirrored thing that used to hang there.  We threw in two mismatched bulbs which in person "look" like they emit the same colour light unlike the below pics).  We were worried that the two bulbs in this fixture wouldn't be enough illumination (our old fixture was a 5 bulb one), but as we can go up to 100 watt bulbs they are more than bright enough, especially when combined with our shower light which you can just see reflected in the below shot. 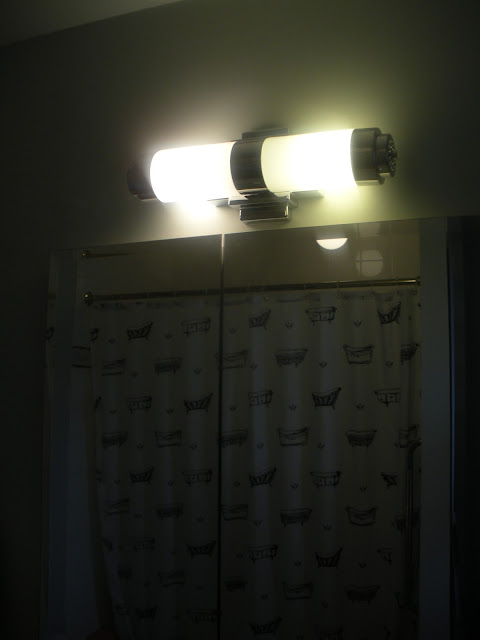 One of my fave features is the little ventilation pin holes in the side which cast a fun pattern on the walls. 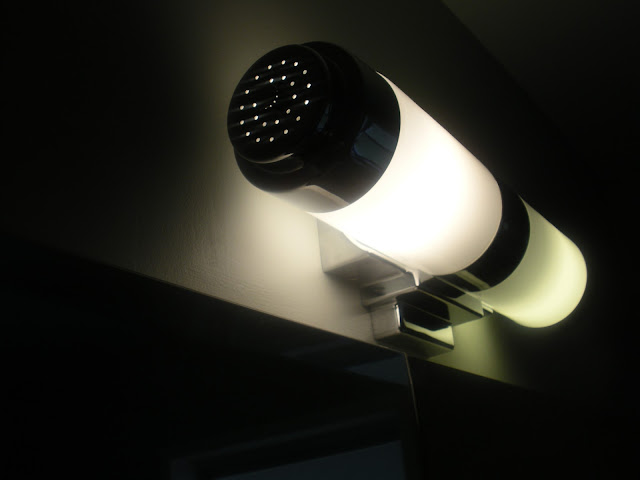 It's not centered over our mirror, and the room still drives me nuts, but with a new paint job (BM Moonshine which I'll count as free since it was leftover from our basement reno), and a new light we are on the road.
Posted by Sarah at 6:57 AM