I was all commited to finishing up my growing list of WIP's.... when I stumbled across some super cute paper piecing patterns over at Sewhooked.

Since H had to work late last night leaving home on my lonesome, I rushed through my normal to do list, whipped up some KD (one of my imported from Canada indulgences!), and gave paper piecing a crack. So, even though I have a ton of other things that I should have been doing, my excuses of: 1. they were cute and 2. I have to do some paper piecing for a one of my bees soon, won out. The fact that the blocks are Christmas related and that it's January, did not persuade me to stop. I kind of figure that at the rate I'm adding WIP's, I'll probably need the 11 months to get it done!!

Anyways, few hours later I had produced these: 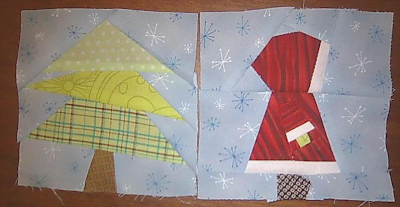 A level 1 tree and a level 2 Mrs Clause, not to shabby if I say so myself.

For some unknown reason I pulled a "striped" fabric out for Mrs Clause's jacket -why you ask would I choose a stripe for my rookie attempts at paper piecing??... dunnno, I think I'm a glutton for punishment! I almost pulled my hair out and stomped on the ground during my attempts to match the stripes but, I'm glad I perservered because I think she turned out pretty adorable. My stripe plan worked out (kind of- they were supposed to be vertical- but at least I matched up the slight angle they ended up on!) by giving the needed definition to her arm so it doesn't blend in- score 1 Sarah :)

Oh yeah, and I love how the background fabric looks like snowflakes :) Before bed last night, I already pulled out the fabrics for the next three blocks, Santa, an elf, and a penguin...