It's beginning to look a lot like christmas... presents!

As mentioned during my To Quilt list update, my bento quilt is almost done. Before leaving Belgium, I had the rough plan and a few draft blocks made, but then it's original intended recipient, wasn't too overwhelmed, so the project got shelved. 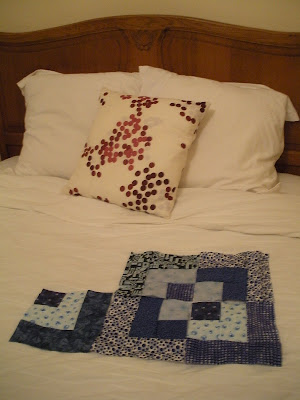 Then my blue loving SIL put in a request for a quilt, and since my brother and SIL have a Modern Asian kinda theme going on at their, I thought my forgotten Bento idea would be perfect. So, I dug out the few blocks I had made before, whipped out another bunch and badabing, hello lap quilt. 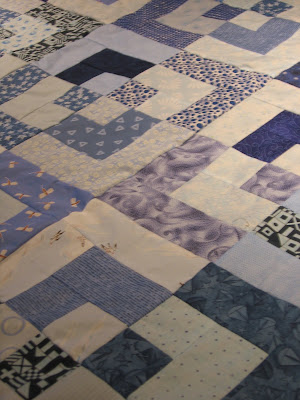 For the back, I had this super cute robin print fabric that I picked up last year during the boxing day sales. I didn't have quite enough of the bird print to do the whole back, and since I'm digging quilt backs with their own character these days, I decided to do some wonky red stars in a randomly staggered along a white strip. 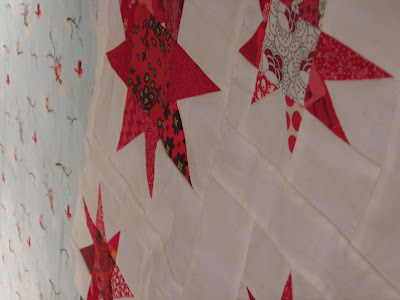 I did realize a bit belatedly that my ingenious plan that would mean that I would have to deal with thread issues on the back. I wanted the stitches to blend in with the light blue background, but I didn't want blue threads to distract from the white and red stars strip. Therefore, I would have to partition off the quilt into two sections and use two different bobbin threads. 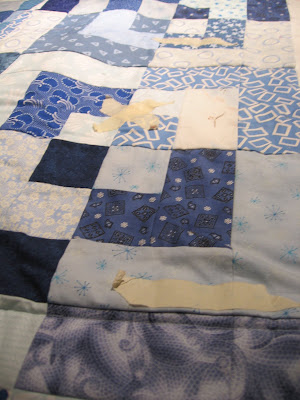 While one side of the star strip lined up perfectly with the edge of a bento square (as planned), I was not so lucky with the other side... it landed about 1/3 of the way through another bento box which meant that I couldn't run the whole way around the square with one bobbin thread. So, I came up with a plan, I basted along the offending star strip edge with bright pink thread, to delineate a clear dividing line. 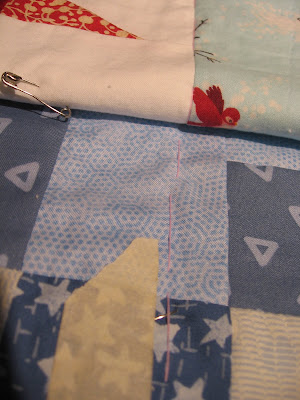 This was I had a perfect line to use to keep track of where to stop and start the different backing threads.

While showing the almost finished quilt to H, he commented that he loved the sparkle on the backing fabric..... I was pretty confused since it is just a regular ol' piece of cotton. Then I realized that he meant the bobby pins holding the quilt sandwich together!!
After a little brainstorming... H suggested embroidering with silver thread (umm, he obviously has no idea about the poor state of my embroidery skills), and I suggested puffy paints, yup you read that right, puffy paint.
As a life long crafter, I had a stash of puffy paints from my teen days of decorating my own t-shirts (do you remember those days?!). After rummaging around in my closet, I found my old craft box, and low and behold.... my 10+ year old fabric puffy paints still work like a charm.
To test my theory, and select the right colour, I used some scraps of the backing, and had fun. After testing out a few options: silver- too dirty looking, silver sparkles- too bright and distracting, blue sparkles- totally wrong... 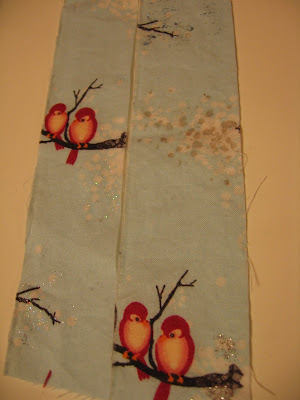 I finally found a winner... iridescent "crystal" sparkles. They give just enough sparkle, without distracting from the great fabric pattern, the perfect wintery touch (sorry for the bad pic!). 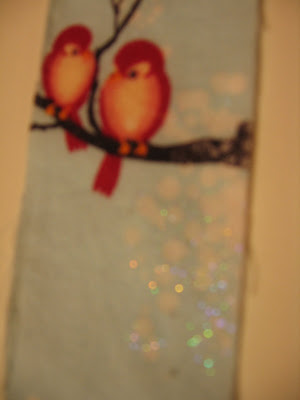 Instead of using the fabric paint in the traditional way which creates a real 3d texture, while I want the sparkle I want to keep the fabric feel, so I am planning to use my finger to almost finger paint the sparkles in the desired locations.