The other day H noticed evidence that we had some visitors... and I'm not talking about the kind one looks forward to.


About a year ago we inherited a mahogany chest of drawers from H's grandparents... It's been around the block a bit (we are the 5th generation of his family that has taken care of this) but considering how old it is and the amount of times it has been moved, it has done remarkably well.

Edited to Add: When we received the cupboard from H's family last year it already had many woodworm holes, something that is quite common in old furniture (it is over 150 yrs old!). We gave it a quick look and then thought nothing of it- until H took a second look last week. As the lifecycle of woodworms is very long (from 1- several years), it takes a long time for any evidence of an infestation to become visible. We know that H's Grandpa treated it for woodworm many years ago, but it is difficulty to know if he just missed a few of them or if it is a new infestation.

Infestations are much more likely in areas of high humidity (ie damp places like attics, basements etc.), so treating it with anti-woodworm and having it in a nice heated house should dramatically cut dsown on our chances of a return infestation.

As two relative DIY rookies, we consulted our furniture care bible, we quickly found out how to check if the "infestation" was active or not. 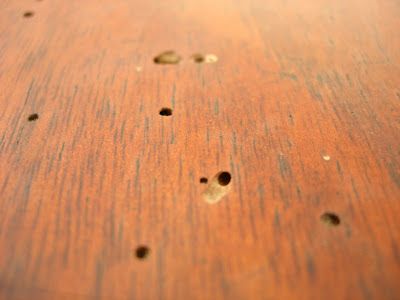 According to The Book, the holes are the "flight holes" which are created when the fully grown woodworms (it's actually a type of beetle) burrows it's way to the surface of the wood.

With this double positive result for a recent infestation there was a high chance that they were still around With the thought of the reepy crawly beetles crawling through my fabric stash (which is currently stored in that cupoard) our house enough of a turn off, plus the damage these little beesties can do to the cupboard and the distinct possibility that they could move in on one of our other pieces of furniture), we decided that action was required.

A quick stop off at the DIY store later we were armed and ready. 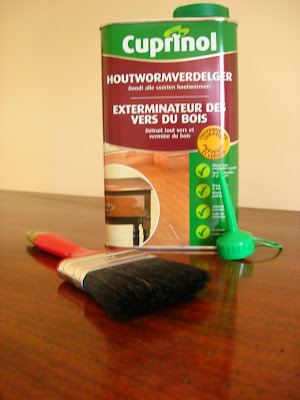 First up we gave the cupboard a thorough cleaning with the vaccum- apparently the wordworms like dust and dirt, so clean wood is key to keeping them at bay. 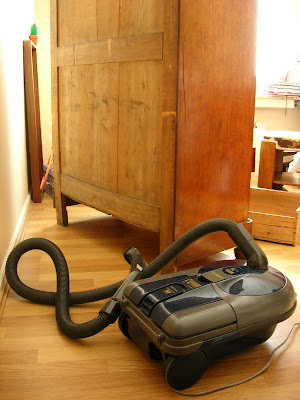 Then H got started injecting the flight holes with the anti-woodworm product. You really want to push the fluid in as the woodworms create a whole network of tunnels in the wood before they are all grown up, so you want the fluid to spread throughout their little wormy road system. 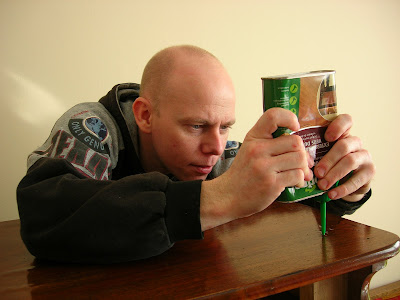 As H was squeezing the product in, we could see it travelling through the tunnels, and sometimes it would even dribble out of another hole... sneeky little worms! 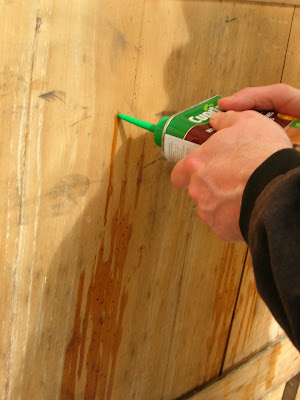 While H was busy attacking the holes, I went to work on the drawers.

The woodworms lay their eggs in the dirty cracks and crevises of untreated wood, so to get rid of any existing wormies, and to prevent anyone in the future from thinking our cupoard was a good place to start a family, I painted the anti-woodworm product on all of the unfinished wood, both the drawers and carcass of the cupboard, giving a double dose to the really problematic areas. After 48 hours to dry/absorb, it's then time to polish up the wood, and we are back in business. Bye bye, wormies... hope not to see you around here any time soon :)